Mount Orlando, The Split Mountain, The Turkish Cave and The Mausoleum of Lucius Munatius Planco 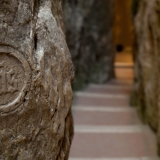 Mount Orlando is an appendage of the Aurunci Mountains. Its northern side was declared Regional Park in 1986. The park, which covers an area of 53 hectares, has a rich and unique vegetation, typical of the hottest areas of the Mediterranean.

Another peculiarity of nature in the park is the so-called Split Mountain, which can be reached from Serapo. It is an impressive cleft in the rock due, according to tradition, to the earthquake that followed the death of Jesus Christ. Along the slit were built 270 steps leading to the Chapel of the Crucifix, built by Benedictines in 1400. In front of the shrine, another staircase leads to the Turkish Cave. This grotto opens up on a sea protected by the WWF as blue oasis to preserve the ecosystem.

Inside the park on top of the mountain there is the mausoleum of Lucius Munatius Planco dating back to the Augustan age. It can be reached following a beautiful scenic route. From the square in front of it, you can enjoy a wonderful view over the Gulf of Gaeta.

The Sanctuary of the Split Mountain and the Holy Trinity, founded in the eleventh century by the Benedictines, is accessible through a beautiful road that overlooks the beach of Serapo. From the right side of the Church of the Trinity, through a corridor, you can go down "vertically" to the Chapel of the Crucifix, situated on a rock. From this position you can admire the Sanctuary and a beautiful Mediterranean landscape that evokes all the fascinating richness of this ancient sea.

Ancient legends of pirates are mixed with stories of saints and everything is combined in a palpable aura of mystery in contrast with the bright colors of the sky and the sea.

In recent decades, the Split Mountain in Gaeta has also discovered a new way to become more fascinating: its mountaineering tradition supported by the compactness of its beautiful limestone. Lovers of this sport cannot resist to the call of this mountain and climb up on the vertical walls which scent saltiness, surrounded by an incredible scenery, between sky and sea. On the sides of the mountain, about 130 meters high, ten ways have been opened. They are all equipped flawlessly, vary in difficulty but are never dull. They all share the classic way down, the chimney, which allows to reach a ledge in contact with the sea after a dizzying abseiling of 110 meters. In special circumstances, when the waves lash the windswept rocks below, there is such an anxious atmosphere that in the past has caused renunciation of famous alpinists before the descent.
The ascent is mandatory!

You cannot give up, or better a possible withdrawal costs an inglorious return by boat to the beach of Serapo. The conquest of the summit, as always, is exciting. But in such unusual environment perhaps is even more rewarding because the atmosphere has a special charm and makes you feel part of the mysteries and the appeal of the area.
In these pictures you can see the descent and the ascent ways. 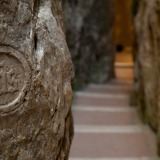 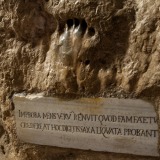 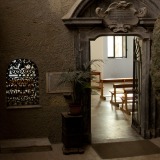 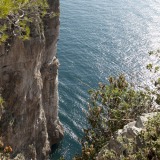 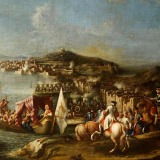 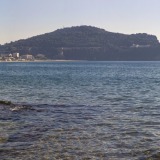 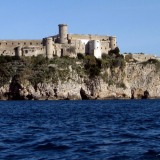 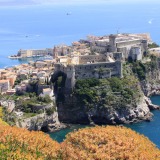 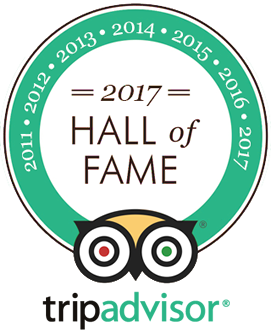